“Dick mentioned the Cello. I was thinking of the Cello, mixed with the Marimba.”

Firstly I want to say one thing.  I love the way Dudley Simpson says “Marimba”.  He turns an established percussive instrument into something full of wonderment and untapped possibilities.

The quote above will be familiar to many Doctor Who fans whose interest includes the production of the series.  It’s taken from the celebrated ‘Whose Doctor Who’ documentary screened by the BBC in 1977.  In it, there is a scene where soon-to-be Blake’s 7 producer David Maloney and Dudley Simpson discuss the timings and the score for ‘The Talons of Weng-Chiang’.  As the tape of the footage is paused Dudley looks up into the heavens, and with a gleam in his eye, formulates his idea for the scene. 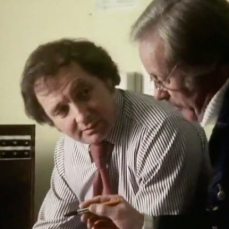 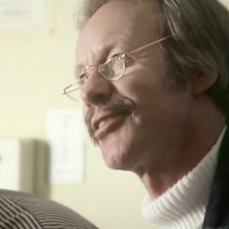 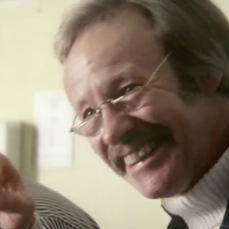 Car springs, Cello and Marimba.  Somehow that beautifully represents Dudley’s arrangements of his Blake’s 7 era – accomplished work using predominantly conventional orchestrial instrumentation, but with added fizz and atmosphere.  But there was nothing conventional about Dudley’s work.  It instructed the audience how to watch the scene.  It anticipated things to come, it responded to things that had just happened, and it expressed what was happening on screen at that particular moment.  In short it was one of the most important links to the audience, and never was that more so than the moments that murmmered underneath the action unfolding on screen, as opposed to the familiar motifs and melodies that we know so well.

When I started this blog, there were so many things that I wanted to finally talk about, after over 35 years of being a fan of Blake’s 7 and Doctor Who in relative isolation.  Growing up in the playground, Doctor Who was no longer cool, and growing up a bit more, none of my peers had heard of Blake’s 7  – they were all playing football and drinking cider behind the bandstand.  And during my teenage years I could have got out more, but I didn’t want to, as I was too busy enjoying the soundtrack to 1970’s BBC fantasy series.  I could have learned to play the piano properly – but I didn’t want to, I just wanted to learn various moments that Dudley Simpson penned on my own, away from any kind of formal musical education.  Luckily my Dad was on hand with the piano, so all was well.

I’ve always felt that Dudley’s more melodramatic sensibilities were suited to a series like Blake’s 7, a drama where character interactions and strong emotive situations existed in a tense, suspenseful and energetic atmosphere.  When I listen to his evocative score for the Doctor Who episode ‘City of Death’, I’m reminded of some of the wonderful melodies that accompanied ‘Project Avalon’.  When I hear the jungle of ‘The Deadly Assassin’,  I’m reminded of the way he scored the jungle scenes in ‘Trial’.  It’s about the pauses, the percussion, the deep menacing notes.  Then there’s the deeper understanding of characters on screen, and how we should feel about them – Dudley’s motifs of the crew in ‘Sarcophagus’ or the flashbacks of Anna Grant in ‘Rumours of Death’ are great examples. When we see Anna Grant through Avon’s mind, there’s clearly warmth, affection and fondness – but the music suggests otherwise.  The seeds of doubt have been planted.

When there are moments of anticipation I think of the scarcity of some of his arrangements, allowing us to appreciate the mindset of the characters involved.  Take the lead up to the Deeta Tarrant and Vini clash in ‘Death Watch’ – the rat-a-tat-tat of the snare drum and a couple of notes is all it takes.  Or the skulking, grating metallic sounds that accompany Jenna’s exploration of the hold in ‘Time Squad’.

There are times Dudley could be bordering on ‘progressive’ in his stylings – some of the linking scores between scenes in ‘Voice from the Past’ are delightfully bonkers, or the noodlings in ‘Shadow’ that accompany the transition scene from Cally’s subconsciousness, to the establishing shot of Space City, to the scene of Largo explaining himself to the chairman.

Then we have those familiar moments.  Those motifs that pop up more than once.
The sound of the teleportation process is an obvious example.   It’s an intense moment, the leap into the unknown.  And Dudley’s energy provides the backdrop.  It’s not just the descending notes, but it’s the little flourishes once the crew have landed are so important to our understanding of the dramatic potential of being able to teleport at all.

There’s the little riff that usually accompanies the Liberator crew in season B & C – as discussed in ‘City at the Edge of the World’.

When you consider the boldness of the theme tune, and the grandiose nature of some of his arrangements, with big dramatic chords and liberal use of crash cymbal, Dudley used a comparatively small orchestra.  But he could make that orchestra sound big…really big.  And whilst he used his Yamaha synthesiser for much of the 1970’s, it is in Blake’s 7 that it really comes into its own and distinguishes this series from others.   The swirling slightly harpsichord type sound, that in one form or another is retained throughout the 4 seasons truly is the sound of a space vehicle flying through the stars.  You never hear the mechanics, the engines or the whooshes.  And that’s not because you can’t hear anything in space, it’s because Dudley has found the perfect dramatic way of representing this.

And even when the Liberator was destroyed and there was a significant upheavel of cast and crew which lead to a very different style in season D, Dudley updated the sound subtly, without losing the Blake’s 7 feel.  The theme tune motif remained with the model shots of Scorpio, suggesting that the spirit of Blake and his crusade was still very much a part of the series. 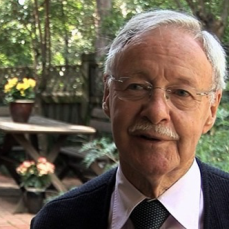 The day after his passing, with his music very much in my thoughts, I created a little suite of moments that stuck in my mind and was representative of the series as a whole.  Moments that I take great enjoyment of.

Part I – Flying through space.
The Liberator is the key here.  It drives the music.  The moment the Liberator first appears in ‘The Web’ and ‘Mission to Destiny’ are perhaps the stand out moments when it comes to ‘announcing’ the Liberators presence.  These are majestic motifs, full of confidence and boldness, but also reassuring for the audience to hear, as though we have waited too long for our friend to appear on screen.  Whilst there is no doubt that the interior and exterior design is why this ship is so loved in science-fiction circles, it is important not to forget that it is Dudley’s music that give us permission to enjoy it’s appearence on screen.  In my mind the concept of the Liberator – the audiences experience of it – is thanks to this wonderful collaboration between Roger Murray-Leach and Dudley Simpson.  As the first series, gives way to the second, the bombast of the now fully established Liberator flying through space is toned down, and we move towards a subtle atmospheric approach.  Examples of this include the reverberation and percussive sounds that introduce ‘Redemption’ as the Liberator flies through the stars, and the more gentle accompaniments that feature in ‘Ultraworld’.

Part II – Stationary in space
There’s a model shot of the Liberator that is used throughout the first three series.  It’s the one which starts with the camera positioned far away on a very starry backdrop, and the beautifully lit and very stationery Liberator slowly drifts closer towards us.  I always noticed that this was a model shot which was accompanied by some of my absolute favourite moments of music in the whole series.  Here the sounds communicate an epic,  large-scale feel with the whole of space at our disposal.  With the Liberator in stationary orbit, we are also concentrating on the stars and the spaciness.  Dudley represents this with lighter, twinkly sounds, using glockenspiel or vibraphone, or gentle etherial sounds on his synthesiser.  Often these high frequency sounds are accompanied by long sustained notes using strings or woodwind, creating a stillness that fits perfectly with the pace and energy of the model shot.  It’s just brilliant. 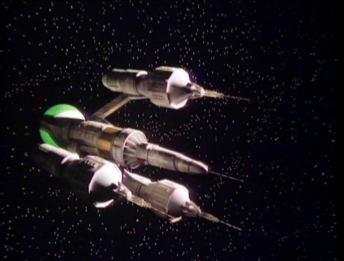 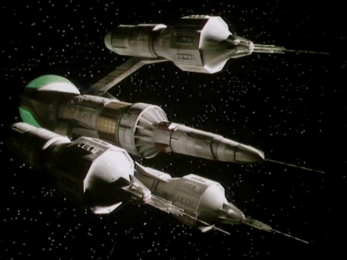 Part III – Assorted suspense and menace.
Action plays a big part of the Blake’s universe, and there are plenty of examples from almost every episode that can communicate this.  Thinking of a standout, I’m drawn to the music that accompanies the slowly rotating satellite that is Federation space command headquarters.   Dudley wrote the ‘Federation March’ which was released commercially, but the menace that accompanies the Terran administration throughout the series is represented by his use of military rhythms and bold brassy rumblings – like a juggernaut.
In ‘Seek – Locate – Destroy’ the introduction to Space Command is accompanied by a series of ascending notes to a pounding rhythm, and there is a nice full circle feel in its last appearance (excluding ‘The Harvest of Kairos’) where this approach is used again.  In fact ‘Star One’ is perhaps Dudley’s most dramatic and suspenseful score in the entirety of Blake’s 7.  The swirling synthesised background sounds are predominant, providing a canvas for other more conventional arrangements to be placed on to.  The overall feel is therefore a denser, more intense affair.  This is in keeping with the high drama unfolding, events of which will change the Blake’s 7 universe forever.
I have also chosen the score that accompanies Avon and Cally’s attempts to remove the explosive devices from the complex before the countdown reaches zero.  Listening to the music with the visual images creates high drama, but take the images away and listen to the music on its own, and you hear an intense, yet quite delicate score that possibly uses Dudley’s favoured car spring, or maybe a more conventional Dulcimer/Cimbalom type instrument.

When I listen to Blake’s 7 as a casual viewer the most discintive thing I hear is the heraldic motif of the theme music.   I also hear the classic Dudley house style.  His small but perfectly formed orchestra.  Brass, woodwind, percussion.  And car spring.  It’s there, doing its job brilliantly.  But Doctor Who had already established Dudley as someone who could do this kind of job beautifully, almost in his sleep.  So at first, I thought his contribution to Blake’s 7 was perhaps less of a revelation to me.

But listening again, and paying increased attention for this blog, I now realise that this simply isn’t the case.  Blake’s 7 was a shot in the arm.  It allowed him a chance to create a concept.  A more complete package incorporating motifs from his very own theme tune into the incidental music itself.  In 1970’s Doctor Who there was a disconnect between the signature theme and incidental music, both in its arrangements and and in its approach.  But here, those wonderful four notes that accompany the very first wonderous image of the Liberator in ‘Space Fall’, is the calling card of the entire series.

Dudley’s arrangements under Doctor Who producer Phillip Hinchcliffe was a period of high quality creative work, bringing out the jepody that was at the forefront of the series.  I’m sure many people reading this will have seen the wonderful recreation of Dudley’s music for ‘The Talons of Weng-Chiang’ in Matthew Sweet’s 2013 documentary ‘Me, You and Doctor Who’.  And while his arrangements under Graham Williams’ era contained some memorable moments, Blake’s 7 gave Dudley a new challenge.  I genuinely believe that this series was Dudley’s pinnacle in terms of the impact of his incidental music, and the establishing of a concept. Whilst it represented the end of his regular gig as the mainstay of BBC telefantasy, it remains his greatest achievement as far as I’m concerned….

…in no small part due to the Marimba.

A lovely arrangement by Alastair King

One thought on “DUDLEY SIMPSON (and a bit about his music for Blake’s 7.)”